South East Asia’s largest dairy farm TH Milk was established in Vietnam in 2009. Today, production is ensured through 40,000 heads of cattle, of which 20,000 are milking cows and 20,000 calves. Annual milk production is approx. 200 million litres, but volume increases every year by 10-15%.

Each cow contributes with approx. 10,000 litres of milk annually which is a very high result compared with milk production in many other parts of the world.

One of the secrets to the success of TH Milk is the fact that they have invested in their own feed mill which enables them to change the feed formula in less than two hours and begin to feed a different mix of feed to the cows shortly hereafter rather than sticking to the commercial formulas from external suppliers.

”After reaching full production of own feed our costs have been reduced to 60% compared to the costs that we had, when we purchased feed”, explains Mr. Hanan Saggi, dairy feed nutritionist of TH Milk. ”And I am convinced that we can reach even better results in a year as we get better and better at producing the feed every day”. 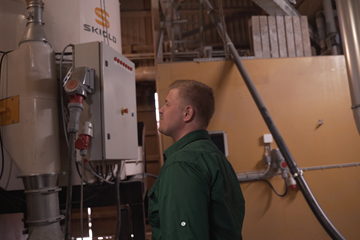